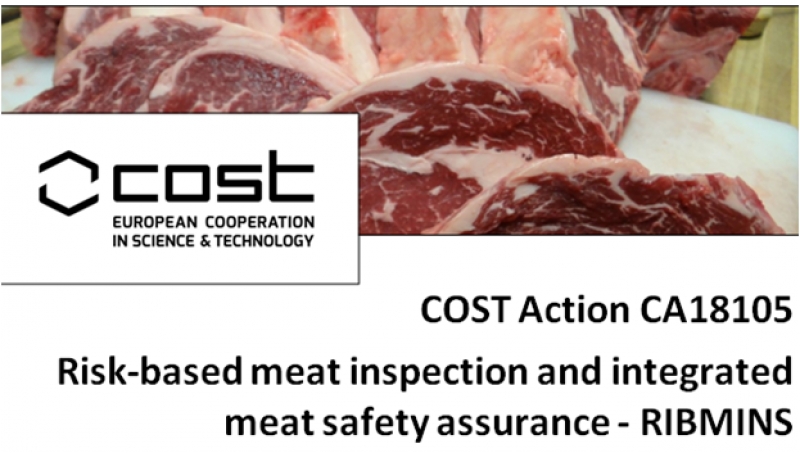 The role of the meat safety system is to provide safe or healthy meat for human consumption. Numerous control measures and procedures are in place throughout the food chain for the production of safe meat, one of which is the inspection of meat, which is an oversight of animals and meat mainly by official veterinarians. However, meat scandals occasionally occur in the EU. Moreover, pathogens such as Salmonella or Campylobacter cannot necessarily be detected on meat inspection. As a consequence, meat or meat products can be sold or consumed before the source of their contamination is identified. Therefore, the applicable meat inspection criteria are revised in the light of scientific knowledge on food.

New EU COST action “Risk-based meat inspection and integrated meat safety assurance” (acronym: RIBMINS) brought together more than 150 experts in the field, including those from outside The EU, dedicated to seeking to improve meat inspection over the next four years of the action. To this end, food safety experts are analyzing how meat inspection can be made more effective and cost-effective for the relevant government institutions and industry, but also for the benefit of consumers. This could be achieved through the development of a meat safety assurance system. This EU COST action is in line with the proposal of the European Food Safety Authority (EFSA) to work towards the establishment of a modern risk-based meat safety assurance system where control measures are applied at those points in the chain meat production where there is a high cost-effectiveness in reducing meat-related health risks.

The initiative to launch the EU COST Meat Inspection Action came from Dr. Bojan Blagojevic, a European veterinary public health specialist and associate professor at the University of Novi Sad (Serbia), who chairs this action: “For more than a century, the old system has been used for a long time to address human health hazards arising from meat but with limited success. My idea was to bring together the best experts from more than 35 countries with the aim of establishing a more efficient meat safety assurance system. In order to address meat-related health hazards, meat inspection must be revised in terms of its basis for risk assessment and as such be part of a modern, longitudinally integrated system that includes prevention and control throughout the meat production chain with a major focus on farms and slaughterhouse. ”

The vice-president of the action is Dr. Lis Alban, assistant professor at the University of Copenhagen and responsible scientist at the Danish Agriculture & Food Council. “Our EU COST action is in the interest of fair competition in the meat industry and more efficient regulatory controls across Europe. In order to accelerate this process, we need to cooperate with each other to find the best solutions so that producers and slaughterhouses can deliver safe meat to all consumers, ”says Dr. Alban, who organized a major conference within the RIBMINS EU COST action at the University of Copenhagen November 6-8, 2019.

The EU COST Action’s scientific communication manager, Dr. Boris Antunovic, professor at the Josip Juraj Strossmayer University of Osijek (Croatia), said: “Within the framework of the action we have well-known experts from different EU countries. Some of them have never met before and are now able to work together for the next four years and share their ideas and experiences in meat inspection. There is also the opportunity for young researchers to join the action through the Short-Term Science Missions app. It’s a very powerful tool. ”

The new EU COST action RIBMINS is also very welcome in the meat industry. Francisco Requena is the director of a 200-year-old Spanish company based in Malaga, which processes 25,000 pigs a week and exports 50% of its production to other EU countries and Asia. “Meat inspection is complex and causes many controversies and problems for the meat industry in its day-to-day business. The effect of using laboratory testing of the final product as a substitute for meat inspection to detect the most relevant human health hazards is very limited. This approach is expensive and not proactive, and on the other hand, the representativeness of the food samples tested due to the heterogeneous distribution of pathogens is questionable. In addition, there is a possibility of delaying the results of the laboratory test, which again depends on the performance of the test, and these only relate to the hazards covered by the test. Taken as a whole, laboratory testing and negative test results certainly do not guarantee meat safety, ”says Requena.

Due to the global increase in international meat trade, EU COST action RIBMINS has already attracted the interest of experts from outside the EU. Dr. Mick Bosilevac, microbiologist at the US Meat Animal Research Center in Kansas (USA) sees EU COST action in meat inspection as a great opportunity for food and meat safety experts: “We are happy that at least in the beef production sector, food safety is not considered a competitive arena, which means that problems and solutions are openly shared and discussed. The public response to an outbreak or withdrawal of beef-related goods does not involve avoiding the purchase of meat only from an involved producer or trader, but as a consequence we generally get a general avoidance of buying all beef products. The more we succeed in trying to get every sector of the food industry from this perspective, the more appropriate solutions can be identified and implemented more quickly. ”

The new EU legislation on official controls, which has been in force since 14 December 2019, ensures, among other things, the application of regulations on food, animal health and welfare and, finally, revised meat inspection procedures. COST action RIBMINS will be implemented just at the time of adaptation of national control systems to the new EU legislation.

In order to better coordinate activities at national levels, RIBMINS national contact points have been established for each country. For Bosnia and Herzegovina, the role of national contact point is played by prof. Dr. Davor Alagić from the Faculty of Veterinary Medicine, University of Sarajevo (davor.alagic@vfs.unsa.ba).

More information about the project can be found at the following link.